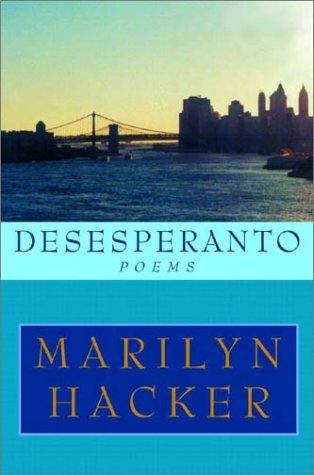 Combining lucid, almost chatty autobiography, outspoken progressive politics and a casual mastery of elaborate forms, Hacker's work has won admiration for poems about city life, and (more recently) for translations of Francophone poets. All those skills receive a renewed airing in this confident 10th collection, which opens with an elegy to June Jordan and closes with elegiac sonnets, blank verse, a ghazal and even a canzone. Hacker's title fuses "despair" and Esperanto, and her book in some sense tries for both. Included are a chain of informative sonnets depicting Parisian streets and scenes: "Rue Beaurepaire" considers the "retired mail clerks, philoprogenitive/ Chinese textiles workers, Tunisian grocers" who keep a drug users' clinic from opening, while "Troiseme Sans Ascenceur" starts from "A square of sunlight on the study wall." Where other Anglos in Paris see the sights, Hacker celebrates everyday life in a multicultural, multiracial city, in poems that can read like a personalized travel guide. Freestanding, and perhaps deeper, poems comprise the volume's third section, mixing personal and public grief: angry about the warlike state of the U.S.-led world, Hacker tries hard to "Call the plumber again./ Remember how to think"; writes multiple poems to her ill friend, the poet Hayden Carruth; asks "Is it luck/ no one gets her old life back?"; investigates the ontology of migraine headaches; and searches for "something clearer about pain." If that clearer thing doesn't quite emerge here, the search remains a starting point.