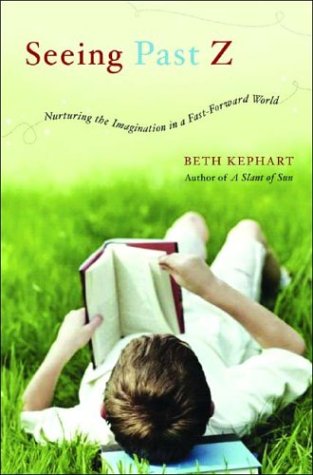 SEEING PAST Z: Nurturing the Imagination in a Fast-Forward World

Give kids the freedom to be kids, says Kephart, in this delightful book that, like her , centers on, in vibrant, loving detail, her 14-year-old son, Jeremy. Let children discover their own passions and interests; guide, but don't force; prod, but don't push; and, most important, let their imaginations flourish. Kephart and her husband have resisted the pressure from today's society to get kids involved in heavy competition and early preparation for college, sports or music. Freed from self-consciousness and with his parents' gentle encouragement, Jeremy has dared to dream that he could be a mystery writer, a poet, a comedian, a filmmaker. Understandably, Kephart's approach has made her an outsider among many parents who believe she's hurting Jeremy and his future prospects. "In the scheme of some things, these parents are right," she concedes. "It's Darwin's world, after all...." But, she says, "I do believe that the push to win is threatening—even already eroding—this generation's happiness." To resist this "erosion," she began a reading and writing group for her son and his friends. These kids' bursting creativity astounded and vindicated her. In serene and sage prose, she concludes that unleashing youths' imagination can create well-rounded, stable, happier people, both in their generation and the one guiding them.