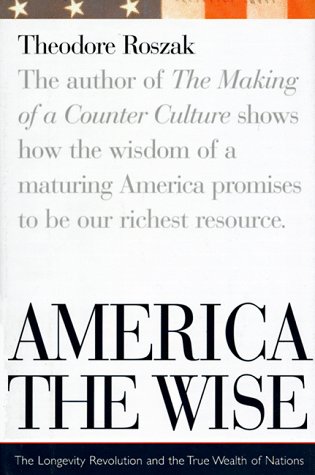 America the Wise: The Longevity Revolution and the True Wealth of Nations

Cultural historian Roszak, who championed anti-establishment youth in his 1969 bestseller, The Making of a Counter Culture, now pins his hopes on the grown-up baby boomers. He argues that ""The New People,"" as he awkwardly calls those entering their 50s, stand poised to become the most progressive, influential senior generation ever, blessed with unprecedented longevity, physical vitality, hungry minds and ambition. Roszak's prediction that large numbers of ""New People,"" imbued with know-how and wisdom, will turn to political activism and volunteer services, triggering a ""senior populism"" committed to public programs and compassionate policies, is an appealing scenario, but he never provides convincing evidence that this is happening or likely to happen. He addresses subjects that are both important and arguably banal, like the simple-minded immaturity of advertising, which he proposes should be replaced by advertising based on enduring quality rather than on novelty. He does forcefully rebut fiscally conservative critics of Social Security and Medicare entitlements, and his wide-ranging meditation offers trenchant observations on the stunted competitive male psyche, pop culture, cyberpunk fiction, the hype surrounding computers, suicide among the elderly and the risks of anti-aging pills. While it may help aging boomers feel that they are still a special generation, those readers seeking an incisive guide to growing old creatively should try Betty Friedan's The Fountain of Age. (Sept.)
close
Details