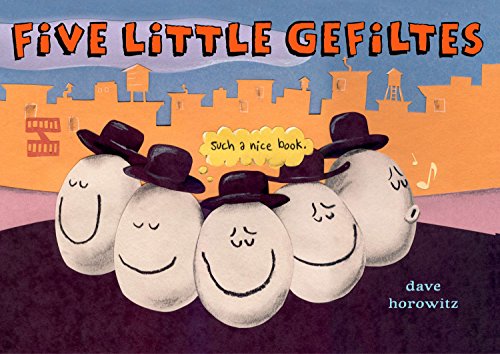 With this endearing if uneven parody of "Five Little Ducklings," Horowitz ( ) initiates youngsters into the joys of Yiddish—just in time for Passover. After explaining what gefilte fish is (though non-Jewish readers may not be helped much by a definition that compares them to "matzo balls made out of fish"), the author sends the five title characters out of their jar to explore New York City. Mama Gefilte's cries of "Oy vey!" meeting with decreasing success as, one by one, the gefiltes are lured away: "One little gefilte went out one day./ A big yellow taxi schlepped him away./ Mama Gefilte cried out 'Oy vey!'/ but not a single gefilte came back that day." Comic asides abound, enabling Horowitz to stuff even more Yiddishisms into his story, including the always evocative "tuches" and "plotz." Of course, all the gefiltes do eventually come back to their meshugana Mama " 'cause each was a mensch!" Horowitz's gefiltes actually do look an awful lot like matzo balls, but their hats give them character, and his compositions play up the puns (e.g., a movie ad for ). Simms Taback's this is not. Think of this as pretty tasty schmear. All ages.