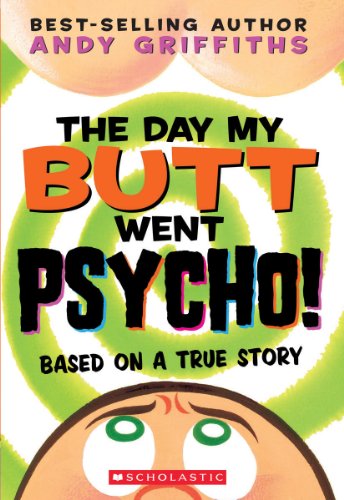 THE DAY MY BUTT WENT PSYCHO!

Griffith's fun gross-out adventure novel follows Zack Freeman, who awakens to see his rear end leaping out the window to lead a bum rally. Zack's butt urges bums to "assume our rightful positions on top of the neck." Zack searches for the "one person who can stop [the plan]," the Bum Hunter, and in the process meets up with legendary bum fighters like the Kisser and the Smacker—plus the Bum Hunter's tough daughter, Eleanor. As the team tries to stop the bums from erupting a disgusting bumcano (hint: it's not filled with lava), they encounter a stink tornado, swimming poopoises, the Stenchgantor, "also known as the Great Unwiped Butt"—and a traitor in their midst. Though Zack finally tells his bum, "Well, maybe if I'd taken better care of you... you might not have gone psycho in the first place," kids will gleefully discover there's no great lesson learned here. Some of Griffith's details are hilarious (a fluffy pink toilet seat cover is the perfect tool for trapping bums, who "are powerless to resist them"), others plain disgusting (Zack and Eleanor hitch a ride on an exploding bum pimple), but young readers will likely get a kick out of it all (there's even a glossary included). Ages 9-up.