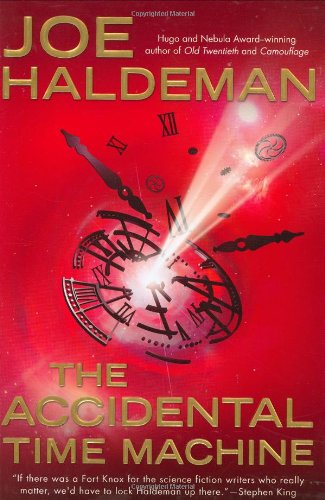 Hugo-winner Haldeman's skillful writing makes this unusually thoughtful and picaresque tale shine. Matt Fuller, a likable underachiever stuck as a lab assistant at a near-future MIT, is startled when the calibrator he built begins disappearing and reappearing, jumping forward in time for progressively longer intervals. Curiosity and some unfortunate accidents send Matt through a series of vividly described, wryly imagined futures where he gradually becomes more adaptable and resourceful as experiences hone his character. The young woman he rescues from a techno-religious dictatorship gives him a chance at a mature relationship, while teaming up with an AI that intends to press on to the end of time forces him to decide what he wants from life. Rather than being a riff on H.G. Wells's , this novel is closer in tone to Neil Gaiman's , another charming yarn about a young man who's forced out of a boring rut. Producing prose that feels this effortless must be hard work, but Haldeman ( ) never breaks a sweat.