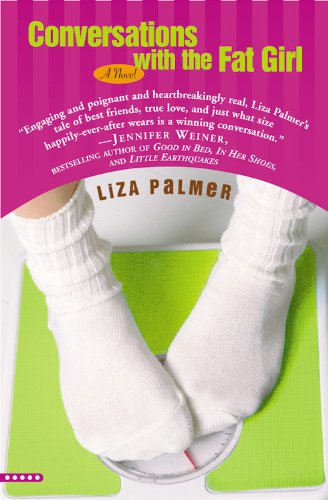 Conversations with the Fat Girl

Palmer debuts with the latest sprightly entry in the ever-expanding category of light romantic comedies starring plus-sized heroines. Maggie has been best friends with fellow fat girl Olivia since they were 12. Following gastric bypass surgery at 22, however, Olivia grows increasingly unrecognizable. Now 27, she's engaged to Adam, a fat-phobic Ken doll, and although Maggie is to be the maid of honor, she feels less and less a part of Olivia's skinny new life. After Olivia disappoints her old friend again and again, Maggie sets in motion a long-overdue and explosive confrontation and walks into the arms of the colleague—busboy to her barista—whom she's had a crush on for ages. By that time, in true chick-lit style, Maggie is both earnestly at work improving herself and being loved for her true, unimproved self. And though Palmer doesn't moralize, it's when Maggie starts to make her own, more realistic wishes come true—by taking a better job and signing up with a trainer instead of a surgeon—that she sees her love requited. It turns out her instincts were good—as are Palmer's.