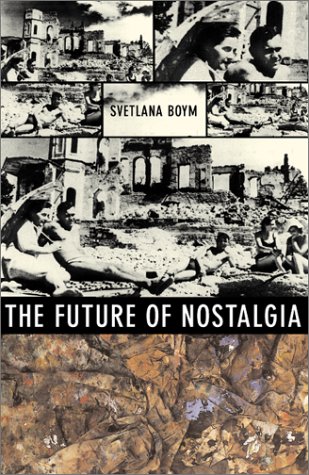 The Future of Nostalgia

The future of nostalgia isn't what it used to be, or at least it won't be once this book starts making its way through academic circles. A sort of training manual for the wistful, Boym's book alternates ""between critical reflection and storytelling, hoping to grasp the rhythm of longing, its enticements and entrapments""; along the way, the author not only gives new life to an old idea but also offers a number of original terms that can be used to describe the experience. The first part of Boym's study surveys the history of nostalgia as a disease and introduces two varieties, a ""restorative nostalgia"" that may contain conspiratorial elements (the notion that a certain ""they"" have destroyed ""our"" homeland, for example), and a ""reflective nostalgia"" that leads to a sense of not being able to go home again. Part two deals with postcommunist cities such as Moscow and St. Petersburg (where Boym, now a Harvard professor of Slavic and comparative literature, worked as a tour guide in the late '70s) and may be of more interest to pure Russophiles than to intellectuals in general. The book's third and final section examines the work of Nabokov, Brodsky and other artists whom Boym calls, in her most useful contribution to critical vocabulary, ""off-modern."" Neither modern nor postmodern, these artists (and their ranks include such odd ducks from the last century as Igor Stravinsky, Walter Benjamin, Julio Cort zar and Georges Perec) ""explore side shadows and back alleys rather than the straight road of progress."" Thus the past may be conceptualized in any number of ways, and apparently, at least according to the author, the only truly pernicious nostalgia is the prefabricated, Disney-fied kind that keeps one from thinking about the future. Otherwise, says Boym, the sky, whether it's the one you see overhead or the one you remember, is the limit. (Apr.) Forecast: This is an interesting addition to cultural history, but a bit esoteric, and is unlikely to find a readerhip outside of the literati.
close
Details