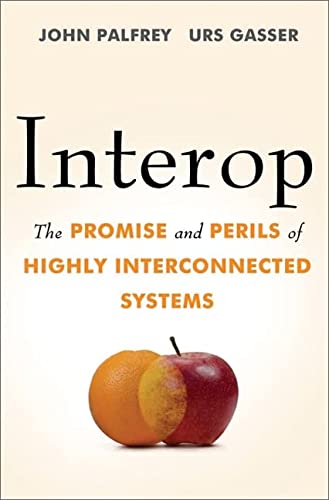 Interop: The Promise and Perils of Highly Interconnected Systems

In this timely treatise, Palfrey, a professor at Harvard Law School; and Gasser, the executive director of the Berkman Center for Internet & Society, explore the concept of interoperability%E2%80%94which the authors define as "the ability to transfer and render useful data and other information across systems"%E2%80%94by analyzing its four "layers:" technological, data, human, and institutional. At the technological and data levels, problems arise when, for example, certain programs work on Macs, but not on PCs. On the other hand, the MP3 file type, which can be played on an array of music players, is indicative of an innovation made in the service of interoperability and efficiency. When considering the human and institutional levels, Palfrey and Gasser (coauthors, Born Digital: Understanding the First Generation of Digital Natives) use case studies like China, the European Union, Facebook, libraries, cloud computing, and even language to illustrate that ultimately "the human element" determines whether interoperable systems succeed or fail. The conundrum is not whether to be connected, but how much connection is optimal. Although "this book is neither a celebration nor a condemnation of interoperability," the authors insist that interoperability is a crucial means of understanding cultural transformations. (June)
close
Details