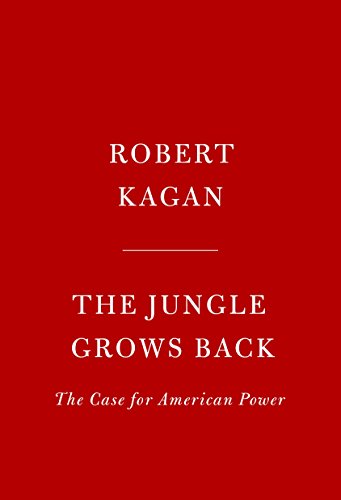 The Jungle Grows Back: America and Our Imperiled World

Kagan (The World America Made), senior fellow at the Brookings Institution, argues against the United States’ recent retreat from its global responsibilities in this brief, engaging call to arms. For Kagan, this retreat reflects a fundamental error: Americans believe that the “liberal world order”—peace throughout Europe, economic rather than military competition between nations, democracy as the rule rather than the exception—is the product of natural human evolution, when in fact it follows from decades of purposeful American effort, struggling against the grain of “both history and human nature.” Since WWII, he argues, the United States has used its power to guarantee security, cultivate prosperity, and encourage democracy in ever-growing portions of the globe. But this is an unceasing and exhausting task, and Americans of all political stripes have come to doubt its necessity, he writes. For Kagan, it is therefore all the more important to reinforce America’s commitment to “ideals of freedom and cosmopolitanism” around the world, as well as to recover the “will and determination” to prevent others from tearing down what has been so painstakingly built. The alternative, says Kagan, is to allow the “jungle” of international chaos to overgrow a leaderless world and “engulf us all.” Whether readers agree with his conclusions or not, they will find his argument accessible and well-constructed. [em](Sept.) [/em]
close
Details