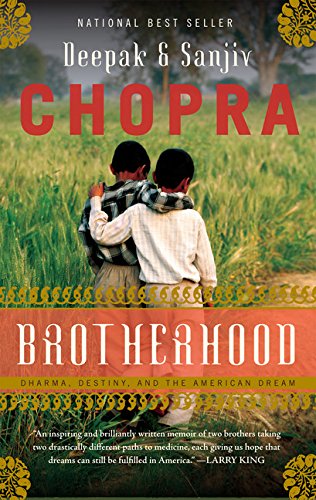 The Chopra brothers, two sons of a British-trained cardiologist in India, grew up to embrace both Eastern and-Western medicine in America. They charmingly recount their experiences in alternate, temperamentally uneven takes in this memoir. Deepak is enormously well-known as the disseminator of the Indian holistic practice of Ayurveda in the West, through his score of books (Perfect Health et al.) and medical practice; his younger brother, Sanjiv, is less known but no less revered as a practicing liver specialist, teacher at Harvard Medical School, and also an author (Leadership by Example). The two affectionately vie in telling their family stories, from growing up in the 1950s and 60s in an educated Hindu family in India, moving (according to the dictates of their father’s career as an army doctor) from Pune, to Jabalpur, to Shillong to Delhi, attending the Irish Christian Brothers schools, forming their own cricket teams (Sanjiv was the better athlete, Deepak the scholar), and ultimately both resolving to study medicine—to the delight of their parents. Yet while each immigrated to New Jersey and then moved to Boston to study and pursue his specialty-—with Sanjiv focusing on gastroenterology, Deepak on endocrinology—Deepak’s immersion in Transcendental Meditation led by the Maharishi Mahesh Yogi steered him back to traditional Indian practices, ironically. The bifurcated memoir depicts some fascinating aspects of Indian assimilation in America, and the often hilarious, touching cultural clash. (May)
close
Details