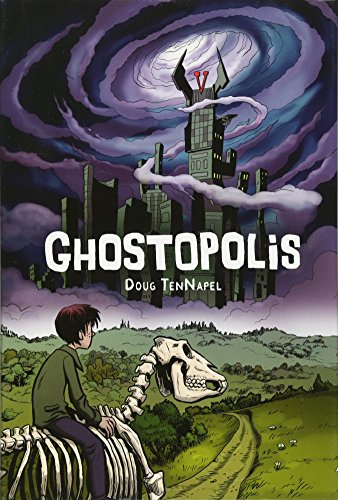 TenNapel's latest adventure comic for kids begins with the discovery of Benedict Arnold's whiny ghost hiding under a bed, and goes on to introduce readers to a host of other humorous and interesting characters, some historical, others very contemporary. Garth Hale is the protagonist, and he starts his story spunky but sick with a life-threatening illness. When, through a technological mishap, he's transported into the afterlife, death gives him a new lease on life. Garth is accompanied by a dinosaur skeleton he calls Skinny, and he soon meets up with his grandfather Cecil—who, in the afterlife, is Garth's age. The two join forces to fight the evil ruler of the ghost city, Ghostopolis, and to get Garth home. In spite of its many twists and turns, the story remains clear and engaging throughout, and Garth is a likable sort. There are plenty of action sequences, illustrated with energetic drawings, and a host of smart-talking characters make the story fun. Occasional wordless skits, like a scene of two squirrels wrapped in bandages fighting over an acorn, add charm and extra dashes of humor. TenNapel is an accomplished creator of graphic novels for kids, and this is sure to appeal to all those who love his most famous character, Earthworm Jim. Ages 12–up.