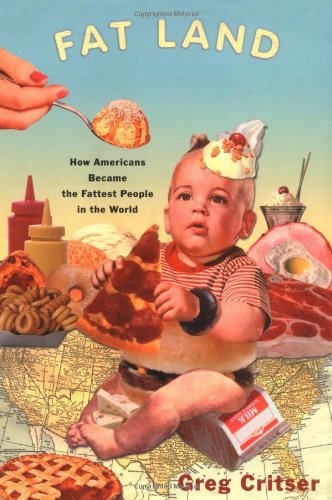 FAT LAND: How Americans Became the Fattest People in the World

You reap what you sow. According to Critser, a leading journalist on health and obesity, America about 30 years ago went crazy sowing corn. Determined to satisfy an American public that "wanted what it wanted when it wanted it," agriculture secretary Earl Butz determined to lower American food prices by ending restrictions on trade and growing. The superabundance of cheap corn that resulted inspired Japanese scientists to invent a cheap sweetener called "high fructose corn syrup." This sweetener made food look and taste so great that it soon found its way into everything from bread to soda pop. Researchers ignored the way the stuff seemed to trigger fat storage. In his illuminating first book (which began life as a cover story for ), Critser details what happened as this river of corn syrup (and cheap, lardlike palm oil) met with a fast-food marketing strategy that prized sales—via supersized "value" meals—over quality or conscience. The surgeon general has declared obesity an epidemic. About 61% of Americans are now overweight—20% of us are obese. Type 2 (i.e., fat-related) diabetes is exploding, even among children. Critser vividly describes the physical suffering that comes from being fat. He shows how the poor become the fattest, victimized above all by the lack of awareness. Critser's book is a good first step in rectifying that. In vivid prose conveying the urgency of the situation, with just the right amount of detail for general readers, Critser tells a story that they won't be able to shake when they pass the soda pop aisle in the supermarket. This book should attract a wide readership.