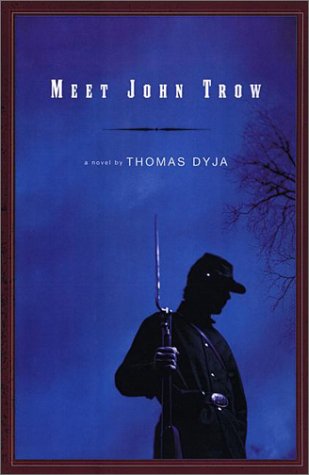 In Dyja's darkly comic second novel (after ), Steven Armour—like many of his fictional contemporaries—is mired in a midlife crisis. He and his hard-edged lawyer wife, Patty, have recently moved from New York to the suburbs of Connecticut with their two children, innocently out-of-whack five-year-old Emily and increasingly distant 12-year-old Nate. Disrespected by his corporate superiors, alienated from his wife and offspring and generally aggravated by modern technology, Steven longs for a retreat to the simpler days of the past. On a lark, the Armours take a short trip to nearby Riga Village, a Civil War reenactment town, where Steven finds exactly what he needs. In the village, men and women assume the persona of former townspeople who fought in the Civil War. Steven is assigned the character of John Trow, whose masculine directness and innate sense of duty bolster his floundering sense of self. Along with some encouragement in the form of a series of teasing billets-doux from the wife of his superior, Colonel Kellogg, Steven willingly falls deeper and deeper "into the strong arms of the past." Dyja skillfully and humorously evokes the constant computer, television and general pop culture static that clouds Steven's vision, as well as the crack of musket fire and whiff of gunpowder in Riga Village. Though he sometimes lays the lingo—contemporary and 19th century—on thick, he charts Steven's identity crisis with sympathy and a healthy hint of sarcasm, concluding with a clever and intriguing twist.