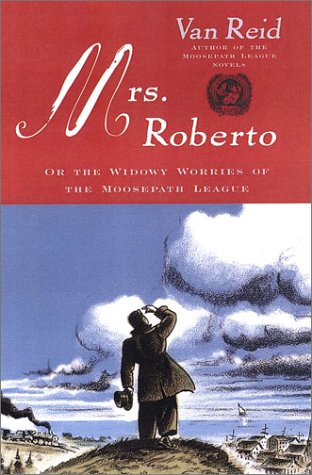 MRS. ROBERTO: Or the Widowy Worries of the Moosepath League

Reid returns with the fourth rousing installment in his series featuring the bumbling but well-intentioned members of the Moosepath League of Portland, Maine, circa 1897. Comic, ruefully romantic and ever so tongue-in-cheek, this genteel and entertaining if sometimes meandering farce once again chronicles the league's lighter-than-air antics. Though Chairman Tobias Walton has faithfully promised his fiancée, Miss Phileda McCannon, that he will "enter no intrigues, nor court unusual company" while she's out of town, he and his faithful assistant, Sundry Moss, can't help addressing the mystery of depressed Hercules, a pig once the very soul of Fern Farm. Meanwhile, a trio of Tobias's fellow Moosepathians—Joseph Thump, Christopher Eagleton and Matthew Ephram—engage in an adventure of their own. When they attend , a play with a very intriguing second act, they become convinced that Mrs. Roberto, a celebrated Ascensionist (she parachutes from a hot-air balloon "in her attractive suit of tights"), must be rescued from some unknown peril. Soon, Thump's humble look-alike, Thaddeus Q. Spark (proprietor of the Faithful Mermaid), and Mailon Ring, a mysterious street urchin, are involved in this comedy of errors, which is further complicated by Fuzz Hadley and his vile gang. Reid has carved a niche for himself with his Victorian spoofs, redolent of New England and full of derring-do and old-fashioned romance, and he is in top form with this latest series entry.