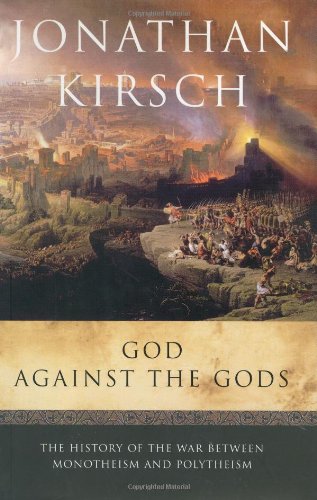 GOD AGAINST THE GODS: The History of the War Between Monotheism and Polytheism

The story of the suppression of polytheistic religions in the ancient world by the ever more powerful monotheistic religions is well known. Kirsch ( ) offers his own version of this oft-told tale in a lively and engaging chronicle. Although many scholars point to Israel as the fount of monotheism, Kirsch shows that the earliest impulses toward monotheism can be found in Egypt with pharaoh Akhenaton's attempt to move the nation to the worship of one god. This Egyptian likely influenced Moses, according to Kirsch, and much of the history of early Israel is the history of the worship of one god emerging out of the worship of many gods. Monotheism gained momentum with the development of Christianity and was codified under Constantine. His son Julian strove to return polytheism to the scene by issuing edicts of toleration concerning polytheistic religious customs, but Julian's successor Theodosius I restored monotheism as the official practice of the Empire. Kirsch helpfully points out that the conflict between the worship of many gods and the worship of one true god never disappeared from the lives of Israelites, Jews, or Christians, in spite of many historians' claims to the contrary. In addition, Kirsch observes that monotheistic religions have too often used the worship of one god as a way to persecute those who do not share similar beliefs. While Kirsch breaks no new ground, he demonstrates clearly the ways in which this conflict gave rise to the tensions that exist even within monotheistic religions today.