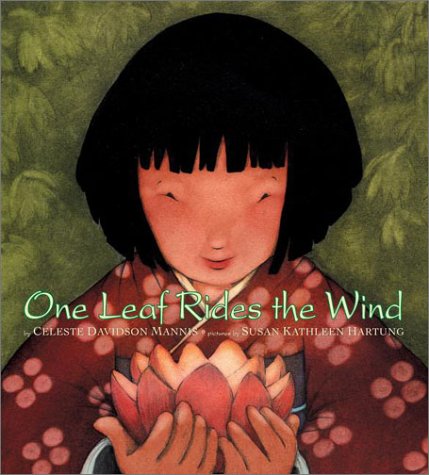 ONE LEAF RIDES THE WIND: Counting in a Japanese Garden

A Japanese girl in a rust-colored kimono tours a temple garden and counts its fixtures one to 10, accompanied by newcomer Mannis's haiku poetry. The book's elegantly spare design fits its Zen-influenced theme: a watercolor on the left, framed in a white border, faces a haiku on the right. The girl reaches for a drifting maple leaf in the first spread ("One leaf rides the wind./ Quick as I am, it's quicker!/ Just beyond my grasp") and Hartung () places her squarely at the garden's entrance. As she admires bonsai ("a miniature forest"), views a pagoda (with its "five roofs [that] stretch to heaven") and drinks tea in a teahouse, the artist fills in details that trace her pathway before the girl lies down beside a lotus-covered pond: "What do flowers dream?/ Adrift on eight pond pillows,/ pink-cheeked blossoms rest." Notes in smaller type below offer more information (lotus blossoms "represent purity and mirror the soul's ability to reach beyond muddy waters to the sunlight of a better existence"). Little birds and a saucy cat accompany the girl through gently tinted, sweetly stylized paintings. The last spread shows the entire garden, revealing the girl's progression through it. Mannis's haiku act as both a guide to some of the elements of traditional Japanese culture and a useful introduction to the haiku form. Hartung's watercolors combine areas of finer draftsmanship with simple washes; in the artist's hands, the landscape becomes a series of meditative images. Ages 4-8.