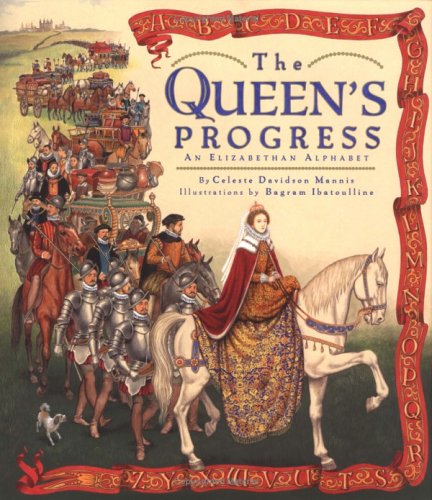 THE QUEEN'S PROGRESS: An Elizabethan Alphabet

Dense, erudite and absorbing, this collection of verse and prose about the travels of England's Tudor queen brims with information and energy. Queen Elizabeth spent her summers traveling throughout her country, leading a caravan of hundreds of courtiers and trunkloads of supplies. "Unmask the traitors in Elizabeth's wake/ as on royal progress we go!" reads Mannis's () opener, cueing readers to trace the ongoing dramas in Ibatoulline's (; ) sumptuously detailed illustrations, a stylistic departure from his previous titles, as conspirators target the queen. Structured as an abecedary, the text pairs a rhyme ("H is for hunters,/ bowstrings drawn tight./ But who's the real target/ as arrows take flight?") with an explanatory paragraph ("The Queen enjoyed hunting in royal parks and the private game reserves of her hosts"). Here Ibatoulline shows an exquisitely dressed Elizabeth on horseback, arrow at the ready. Unbeknownst to her, a page has saved her life by intercepting with his shield the arrow of a would-be assassin. The format smoothly incorporates an impressive range of illuminating and intriguing facts about the era and about the queen (e.g., she rarely ate in front of anyone; she was a talented musician who favored a keyboard instrument called the virginals). Ibatoulline lavishes his pictures with period touches, whether adorning the 26 featured letters with golden vinelike patterns, outfitting the courtiers in brocade or depicting a maze of hedgerows. Readers of all ages will relish the challenge of following the visual story lines and sampling the fruits of Mannis's research. Ages 4-8.