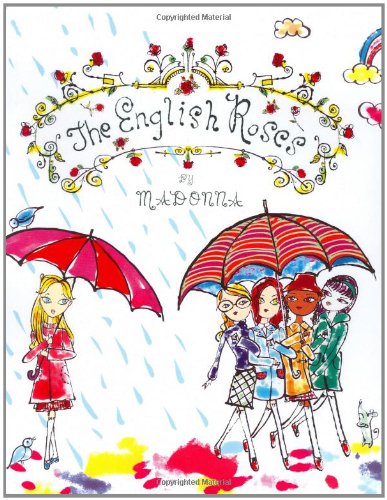 As a singer, she may have pleaded, "Papa, Don't Preach," but as an author Madonna does not heed her own advice, in this debut message-driven picture book about not judging by appearances, the first of five planned titles. "Have you ever heard of the English Roses?" begins the narrator, then ticks off a list of what they are not, followed by "What they are is this:/ Four little girls named/ Nicole, Amy, Charlotte, and Grace." Fulvimari portrays a quartet that could appear on a teen version of , despite the fact that the blonde, redhead, brunette and café-au-lait-complected friends clutch dolls. They sport chic plaid mini-skirts, cardigans, even a short pea coat with a British flag patch pocket. "Here are some things you should know about them," the narrator continues, listing their interests, "Most of all, they love to dance...." In a wordless spread in a pleasingly retro-'60s palette of polka dots, the friends demonstrate various moves (e.g., "techno fox-trot," "hip-hop bus-stop" and a disco pose called "night-fever"). The problem: "They were all a little bit jealous" of classmate Binah. Fulvimari portrays beautiful blonde Binah staring into a fountain in a park where even the trees seem to weep. The story unfolds in fits and starts ("Now, stop interrupting me," says the narrator at several points), but the turning point comes when the four dream the same dream, of a fairy godmother who shows them what Binah's Cinderella-esque life is actually like, and they embrace Binah into their newly formed quintet ("I think we've made a terrible mistake," says Grace). Fulvimari provides the spoonful of sugar to make the medicine go down. Ages 4-8.