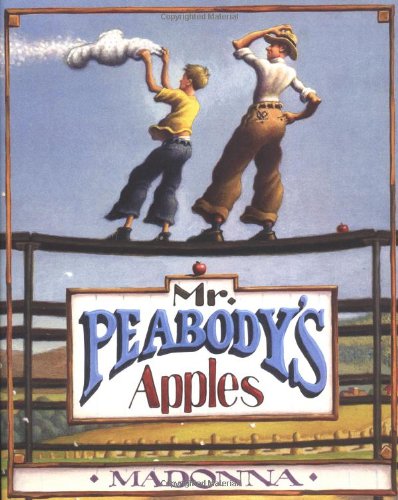 Where Madonna's debut, , examined judgmental English girls and a knowing mother's advice, this second book concerns an all-American boys' baseball team and its misunderstood coach, Mr. Peabody. (The author credits a story her Kabbalah teacher told her as inspiration for this tale.) After summer games in the small town of Happville, good-natured Mr. Peabody ambles home along a mid-century main street, "waving hello to everyone." He always stops at a sidewalk fruit stand, where he "would pick out the shiniest apple, drop it in his bag, and continue on his way." When baseball player Tommy Tittlebottom, whose name echoes the word "tattletale" (and a few other things), witnesses this ritual, he assumes that Mr. Peabody is stealing the apples. Soon all of Happville thinks the coach is a thief, and only a boy named Billy Little is brave enough to confront him. As it happens, Mr. Peabody pays for his apples in advance, and he teaches Tommy a lesson that recalls ("Don't be so quick to judge a person") but the repercussions here are harsher. Long's lushly nostalgic gouaches, with their robin's-egg blue skies, bountiful golden farmlands and working men in straw hats and rolled sleeves, pay homage to the rural paintings of Thomas Hart Benton. The book design alludes to classic work by James Daugherty and Robert McCloskey, and features decorative drop caps, inset sepia illustrations and captioned, full-page color images of the earnest characters and retro setting. Readers may be less than charmed by Mr. Peabody's self-righteous streak but Long's art is worth watching. Ages 9-12.