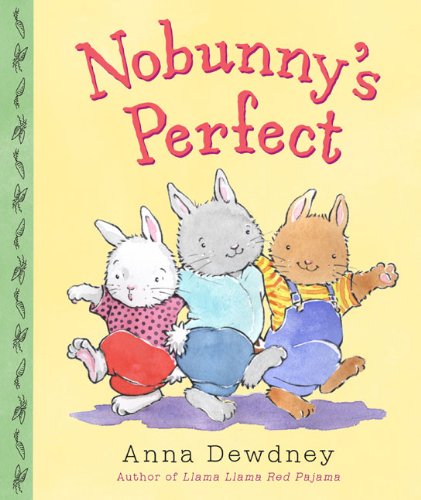 Although this minimalist, paper-over-board story lacks the flourish and sassy protagonists of Dewdney's Llama Llama books, it delivers a similar bid for good behavior. At the start, three bunnies play together peacefully: “Every little bunny's good. They mostly do the things they should.” is right. One bunny's truck breaks, setting off a chain reaction of naughty behavior as he grabs a playmate's toy, which elicits a kick from the third. The middle scenario shows bunnies at snack time, exhibiting less than exemplary manners; unlike many books on manners, this one succeeds in making the wayward models look generally miserable in their misdeeds and not like pint-size folk heroes. The concluding section reveals much happier bunnies following the rules, sharing and being polite, for which they receive a sugary final accolade (“That's my bunny! Good for you!”). Depicted against a white background, Dewdney's cheerfully clad characters act out a range of strong emotions, making an age-appropriate case that feelings are both a cause and an effect of individual behavior. Ages 2-up.