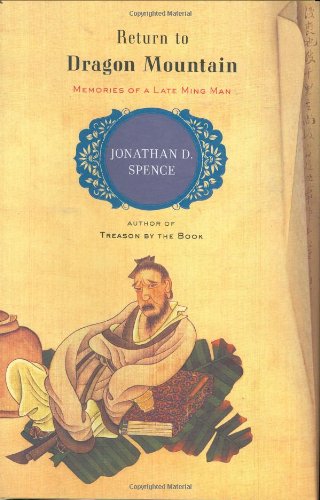 Return to Dragon Mountain: Memories of a Late Ming Man

Zhang Dai (1597–1689), subject of this absorbing and evocative literary-biographical study, was a Chinese essayist and historian whose long life bridged the conquest of China by the Manchus and the fall of the Ming dynasty in 1644. The upheaval inspired him to write a history of the Ming as well as personal recollections of his youth, which Spence ( ), a MacArthur fellow and a leading historians of China, mines for insights into the culture of this period. Zhang's reminiscences about his earlier life as a well-to-do scholar and aesthete are full of poetic reveries—a treasured blend of tea, evening lanterns in his hometown of Shaoxing, an exquisite courtesan, plum blossoms in the moonlight—which contrast with his later circumstances of poverty, coarse food and wizened, querulous concubines. The memoirs are studded with biographical sketches of his vast extended family, a gallery of eccentrics whose lives furnish handy illustrations of moral precepts. They also open a window on the social world of the late Ming scholarly caste, whose lives revolved around eternal cramming for the examinations that controlled entrée into the imperial bureaucracy; Zhang's father was 53 when he finally passed and was able to get his first job. Through Zhang's Proustian sensibility, Spence retrieves a portrait of a civilization imbued with esoteric obsessions as well as sensuality.