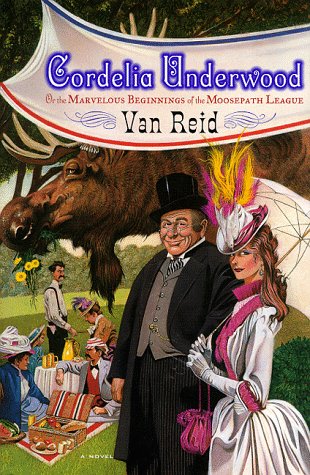 Cordelia Underwood: Or, the Marvelous Beginnings of the Moosepath League

It's been almost 20 years since Truscott's groundbreaking West Point novel Dress Gray, but his concern with honor, tradition and personal accountability are still alive in this solid sequel, which hands Rysam Slaight, now a Lieutenant General, a career crisis on his first day as West Point's new Superintendent. When female cadet Dorothy Hamner dies during parade, the initial diagnosis is heatstroke--which plays right into the hands of West Point's Commander of Cadets, Brigadier General Jack Gibson, who has been masking his dislike of women in the military for years. It also affects Slaight personally: the dead cadet was a member of Company H-3, commanded by Slaight's daughter Jacey. When evidence surfaces that Dorothy was raped just hours before her death, and that she attended a party the night before she died with members of the Cadet Honor Committee, Jacey is immediately suspicious--and angry at her boyfriend, Ash Prudhomme, who was at the party and never told her about it. Truscott deftly mixes the personal with the political and uses the investigation into Dorothy's death to confront various aspects of the military today--funding cuts, female cadets, drug use and conflicting notions of honor. The stakes are clear, and there is no doubt who the good guys are. If the novel has a flaw, it's that Gibson is more a cartoon villain than a worthy antagonist. This lapse is all the odder because Truscott perfectly depicts the head of the Honor Committee, Cadet Jerry Rose. He's the all-too-modern amoral weasel whom every reader wants to see court-martialed. If the same readers want to give Truscott a medal, this novel's as good a reason as any. Author tour. (July)
close
Details