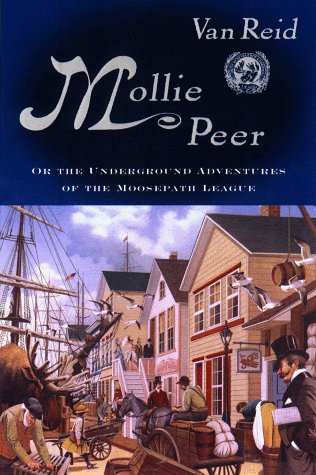 Mollie Peer: Or the Underground Adventure of the Moosepath League

Reid's rolicking followup to the sprawling historical comedy Cordelia Underwood returns to 1890s Portland, Maine, for the further exploits of Tobias Walton and his merry, bumbling do-gooders, the Moosepathians. Mollie Peer, a suffragette reporter, senses a good story when she impulsively follows a frightened street urchin called Bird to Portland's harbor. When he is claimed by menacing Mr. Pembleton, she realizes that Bird's life is in danger, and she enlists the help of baseball player Wyckford O'Hearn. Soon they are joined by the Moosepath League's Ephram, Eagleton and Thump, gallant and well-meaning (if less than keen) gentlemen who never shirk their duty, especially when women and children are concerned. Since their leader, Walton, and his sidekick, Sundry Moss, are away on amorous pursuits, the remaining three Moosepathians must rescue Bird on their own. On the run from the child's pursuers, they encounter the mysterious Indian, John Neptune; the infamous Quibbling Society, a nefarious gang of smugglers that includes two Shakespearean actors; and a man convinced he will die at midnight. Plots, subplots, bizarre Americana, vivid period prose and vintage Down East oddities proliferate from there. Though all the major players here appeared in Cordelia Underwood, readers need not have read that book to enjoy this one. Reid's zigzag plot and the boatloads of comic minor characters recall Oliver Twist, though Reid's aims are certainly lighter than his classic model. He extracts humor from nearly every detail, writing with a gleeful vigor, evoking--nay, escaping to--a time when men trembled at the sight of a lovely woman, baseball and newspapers had just begun to flourish, and adventures seemed to await all comers at every boardinghouse, tavern, railway station and wharf. Author tour. (July) FYI: Reid manages the Maine Coast Book Shop in Damariscotta.
close
Details