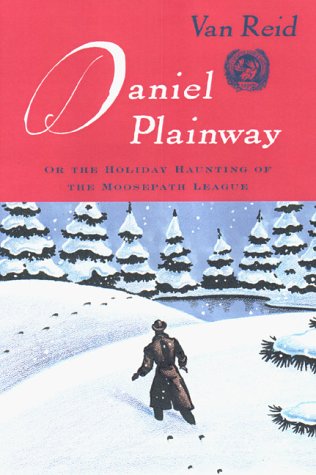 The rollicking adventures of Tobias Walton and the jovial Moosepath League continue in Reid's (Cordelia Underwood; Mollie Peer) engaging third novel set in 19th-century Maine. Reid ingeniously incorporates local color and history in a fast-moving tale that introduces the reader to dedicated attorney Daniel Plainway and the Dash-It-All Boys, three men who aspire to the camaraderie and renown of the Moosepath League. As the people of Portland prepare to celebrate the evolving rituals of Christmas, Walton and company become involved with Frederick and Isabelle Covington. The couple seek help from the League in searching for some mysterious runes, hoping they will prove that the Vikings preempted Columbus's discovery of the New World. At the same time, Plainway discovers that a few months earlier, Walton and the Moosepath League rescued a young boy who had been kidnapped by a group of hooligans (fans will recognize the characters from Mollie Peer). Recovered along with the boy was a portrait of a young woman, presumed to be his mother. Plainway believes the boy, now called Bird, may in fact be Bertram Linnett, the son of his goddaughter, Nell. After a hasty marriage to a handsome boy from an unscrupulous family, Nell died in childbirth, her husband was found drowned and one year later the boy was abducted, along with a portrait of Nell. Supporting characters include Capital Gaines, Pacifa Means and Ergo Define, otherwise known as ""Therefore."" In addition to having fun with wordplay, the author has a knack for injecting the right balance of humor and seriousness into a story detailing the sad dissolution of the Linnett family. The Covingtons' mission brings a sinister element into the plot when yet another private clique, the Broumnage Club (an actual secret society unearthed in Reid's research), attempts to foil their efforts with threats to their lives. On the way to the inevitable happy ending, Reid captures the old-fashioned charm of turn-of-the-century New England in a suspenseful narrative encompassing ghost stories, tall tales, delightfully eccentric characters and an adequate dose of romance. (July)
close
Details