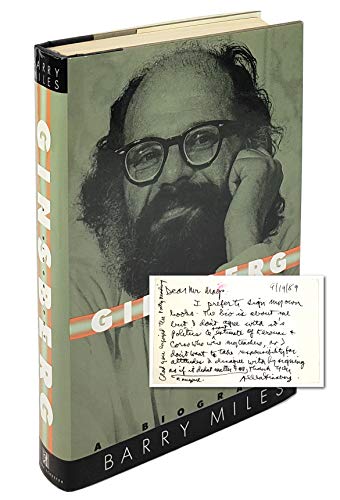 In overgenerous detail, this long, tedious biography records the rise to fame and the search for love by the now 63-year-old poet from Paterson, N.J. Son of a teacher-poet and his demented wife, Ginsberg was accustomed from childhood to crazed and eccentric behavior. In his student days he began using drugs to widen his consciousness and systematically explore his mind. Bizarre, mystic, passionate, pacifistic, gay Beatnik activist, Ginsberg always practiced what he preached in the extreme, according to the author. Miles, a British writer, depicts the poet's soulmates and bedmates Jack Kerouac, William S. Burroughs and Peter Orlovsky, his gurus Chogyam Trungpa and Timothy Leary. Describing his world travels, mantra-chanting, meditation, musical compositions and achievements as a photographer, Miles traces Ginsberg's development into a member of the establishment--``the most famous living poet on earth,'' the ``loudest and most influential voice'' among poets of his generation. Photos not seen by PW. (Sept.)
close
Details