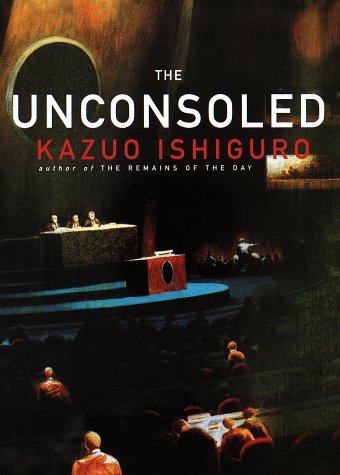 With this stunning new novel, cast in the form of a postmodern nightmare, Ishiguro tells a powerful story in which he once again exploits a narrator's utter lack of self-knowledge to create a devastating deadpan irony. A celebrated concert pianist identified only as Mr Ryder arrives at an unnamed European (seemingly Germanic) city not only to give a concert but also, it seems, to address the townspeople and help them surmount a communal sense of crisis that stems from the city's inability to nurture a musical artist of outstanding creative talent. Strangely, the economic, social and psychic health of the community depends on its regaining its self-image in the wake of a dreadful past mistake, when the city fathers lionized a musician with the ``wrong'' artistic values. Ryder intuits this situation gradually, for he is curiously disoriented; he can't really remember what he's supposed to be doing there. In fact, through Ryder's confused perceptions, the reader is immediately plunged into a surrealistic landscape that has the eerie unpredictability, claustrophobic atmosphere and strange time sequences of a dream. Everyone in this town presents a false image to the world. Each person Ryder meets addresses him with fawning obsequiousness and asks him for a small favor which turns out to be an egregious intrusion into his time. Yet Ryder, infused with an inflated sense of mission, feels a need to console them: ``People need me. I arrive in a place and find terrible problems, and people are so grateful I've come.'' Although he initially thinks he's a stranger in the city, it slowly becomes obvious that he's been here before. In fact, he has been the lover of a woman called Sophie whose little boy, Boris, in many ways replays the pivotal events of Ryder's own life. With dream logic, many of Ryder's childhood friends from England turn up in this inhospitable place, and it becomes obvious that most events are replicas of ones that have occurred before or that fulfill Ryder's fears about the future. As in Ishiguro's previous books (The Remains of the Day, etc.), almost every turn of the plot concerns a failure of communication and a stifling of emotional responses. Children are profoundly wounded by their self-absorbed and insensitive parents; lovers alienate each other across an emotional abyss. The culture-obsessed inhabitants of the city don't recognize true talent when it appears; they disapprove of creativity when it doesn't fit their expectations. Sustaining the nightmarish atmosphere of this tale--its tone alternately sinister and farcical--for more than 500 pages is a tricky business, especially since all the characters express themselves in long, dense monologues. Yet, so adroit is Ishiguro in maintaining suspense that one is as ensnared in the nightmare as is Ryder. The story seems to be a journey through life: its purpose never entirely clear, its events capricious and inexplicable, its destination undoubtedly ``the vast, dark, empty space'' of the soul's extinction. 75,000 first printing; BOMC and QPB selections. (Oct.)
close
Details