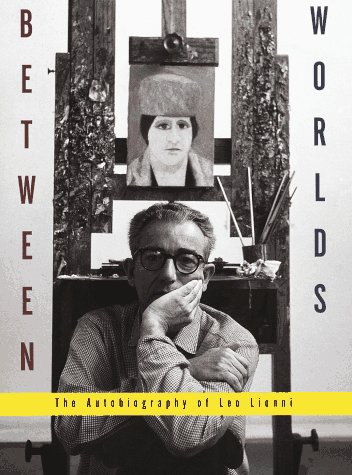 Between Worlds: The Autobiography of Leo Lionni

When at 49 (in 1959), Lionni resigned as design director for the Time Inc. magazine Fortune, an executive asked, ""You mean to say that you are not happy here?"" Lionni insisted that he was. ""Then why are you leaving?"" ""Because,"" he explained, ""I don't want to be that happy."" Lionni did not want to remain in a vocational groove, even a lucrative one. Set free, he could divide his life between the milieu of his youth and the U.S., in which he found himself professionally, and practice all the arts in which he had already sampled success. Further, he could follow his imaginative illustrated book for children, Little Blue and Little Yellow, with a new one each year. (Some would be instant classics, selling in the millions in many languages.) Of Dutch and Italian Jewish ancestry-his family fled Italian fascism for America in 1939-he turned his gift for images and languages into rewarding careers in advertising, design, editing, writing and the plastic and graphic arts. Lionni developed the prewar ""Never underestimate the power of a woman"" advertising campaign and writes (in a book composed before Parkinson's disease limited the use of his fingers) with an ear for metaphor and an artist's vision that charm the reader from the start. Despite his apology, ""My memory always seems to walk in when the show has already started,"" the reader encounters hard-to-forget relatives and friends here and experiences with Lionni his triumphs and tragedies. His narrative emphasizes the earlier years, for, Lionni writes, ""The sixties, seventies, and eighties, once a future, are now zooming by, flickering like... abandoned railway stations in the void of night."" Seventy-five photos and drawings, plus 24 pages in color illustrating his work in many media, add a visual dimension to the memoir. (Apr.)
close
Details