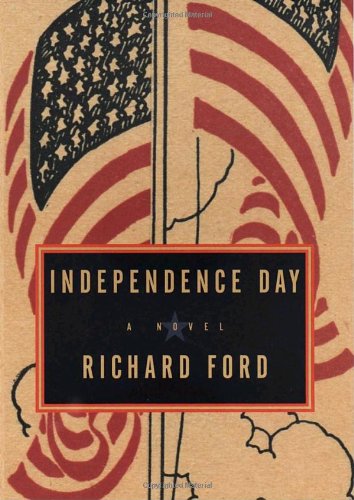 Ford is the author now of five novels and a book of short stories, but he is probably best known for The Sportswriter (1988), widely praised as a realistic, compassionate and humorous view of American life as seen through the eyes of a highly intelligent and deeply involved observer. The man was Frank Bascombe of Haddan, N.J., and for those who came to see him as a new kind of American fiction icon, the good news is that he's back. Independence Day is an often poetic, sometimes searing, sometimes hilarious account of a few days around the Fourth of July in Bascombe's new life. Divorced, working with genuine enthusiasm and insight as a real estate salesman (not even John Updike has penetrated the working, commercial life of a contemporary American with such skill and empathy), embarked on a tentative new relationship with Sally, who lives by the sea, narrator Frank struggles through the long weekend with a mixture of courage, self-knowledge and utter foolishness that makes him a kind of 1980s Everyman. He desperately tries to find a new home for some brilliantly observed losers from Vermont, has some resentful exchanges with his former wife, takes a difficult teenage son on what might have been an idyllic pilgrimage to two sports Halls of Fame, bobs and weaves uneasily around Sally and, as the Fourth arrives, achieves a sort of low-key epiphany. This is a long, closely woven novel that, like life itself, is short on drama but dense with almost unconscious observations of the passing scene and reflections on fragmentary human encounters. In fact, if it were possible to write a Great American Novel of this time in our lives, this is what it would look like. Ford achieves astonishing effects on almost every page: atmospheric moments that recall James Agee, a sense of community as strong as those of the great Victorians and an almost Thurberesque grasp of the inanities and silent cruelties between people who are close. Even as a travel writer, evoking journeys through summertime Connecticut and New York, Ford makes his work glow. Perhaps the book's only fault is a technical one: that so many key conversations have to be carried out, in rather improbable length and complexity, on the phone. But it's difficult to imagine a better American novel appearing this year. First printing 50,000; simultaneous Random House Audio; author tour. (June)
close
Details