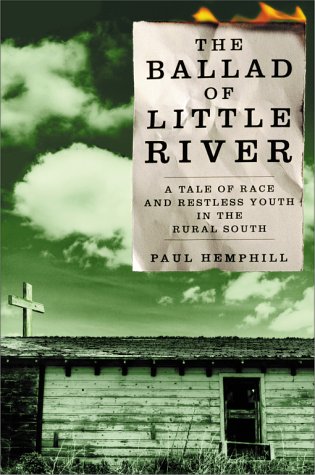 The Ballad of Little River: A Tale of Race and Restless Youth in the Rural South

Southern journalist Hemphill, noted for his telling portraits of the ordinary citizens of Dixie, probes the racial tinderbox in one of Alabama's poorest rural areas. Skillfully researched and written with a novelist's sure touch, his exploration of the economically depressed community of Little River moves beyond its infamy as the site of a huge colonial era massacre to reveal how politicians and industry have neglected it in recent years, transforming it into ""a dangerous, violent place, where if the backbreaking labor or an errant piece of machinery doesn't maim or kill you, a neighbor might."" In the summer of 1997, the bizarre shotgun murder of a young black man trying to force his way into a white family's trailer, followed by a hammer assault on a white store owner by a black convict, heightened racial tensions. Soon afterward, a group of restless, drug-fueled white youths went on a rampage, destroying black churches 48 hours after a rag-tag Klan rally, which Hemphill describes with sadness and dark humor. The book's real strength is the author's ability to bring the area's residents to life through their words and through colorful accounts of the community. Although the white youths were sent to prison, the residual scars of their actions have been slow to heal, despite widespread efforts to rebuild the churches and restore a sense of calm. Hemphill attributes these raw wounds to a poisonous nostalgia for a vanished Old South that continues to victimize both races, a theme he repeats like a mournful drumbeat throughout this engrossing, unforgettable chronicle. (May)
close
Details