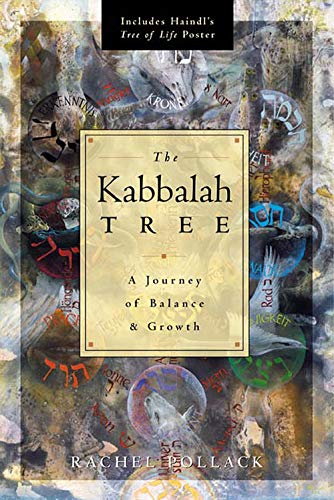 THE KABBALAH TREE: A Journey of Balance & Growth

Tied closely to an intricate painting by Hermann Haindl, this comprehensive look at the tradition of the Tree of Life is part art extrapolation, part multi-denominational history. The "journey of balance and growth" refers as much to the painting itself and the growth of the artist as to the spread of the mythology of the Tree in a multitude of cultures. After barely surviving a WWII prison camp, young Haindl returned to Germany and became a stage designer and theatre director. His artistic prowess gained enough recognition that Golda Meir commissioned him to paint an enormous mural commemorating the 25th anniversary of Israel. Soon after, he embarked on a quest to merge spirituality and art, the result of which led to a fascination with both the Tarot and the Kabbalah. Pollack and Haindl met when she was asked to write a text to accompany his now-famed Tarot deck. This, their second collaboration, makes for a detailed yet interesting read. Well organized and copiously referenced, Pollack does a fine job of combining the Jewish, Western and Christian traditions associated with the Kabbalah Tree of Life. Particularly well done are the chapters describing in detail the 10 or "divine emanations." Along with a handful of line drawings, the included poster of Haindl's painting becomes integral for a true understanding of the connections within the tree. Though not recommended for Jewish traditionalists, anyone searching for a multicultural approach to the Kabbalah will not be disappointed.