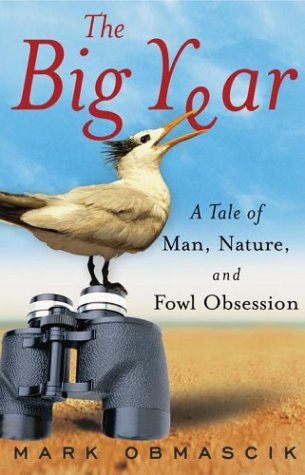 THE BIG YEAR: A Tale of Man, Nature, and Fowl Obsession

In one of the wackiest competitions around, every year hundreds of obsessed bird watchers participate in a contest known as the North American Big Year. Hoping to be the one to spot the most species during the course of the year, each birder spends 365 days racing around the continental U.S. and Canada compiling lists of birds, all for the glory of being recognized by the American Birding Association as the Big Year birding champion of North America. In this entertaining book, Obmascik, a journalist with the , tells the stories of the three top contenders in the 1998 American Big Year: a wisecracking industrial roofing contractor from New Jersey who aims to break his previous record and win for a second time; a suave corporate chief executive from Colorado; and a 225-pound nuclear power plant software engineer from Maryland. Obmascik bases his story on post-competition interviews but writes so well that it sounds as if he had been there every step of the way. In a freewheeling style that moves around as fast as his subjects, the author follows each of the three birding fanatics as they travel thousands of miles in search of such hard-to-find species as the crested myna, the pink-footed goose and the fork-tailed flycatcher, spending thousands of dollars and braving rain, sleet, snowstorms, swamps, deserts, mosquitoes and garbage dumps in their attempts to outdo each other. By not revealing the outcome until the end of the book, Obmascik keeps the reader guessing in this fun account of a whirlwind pursuit of birding fame.