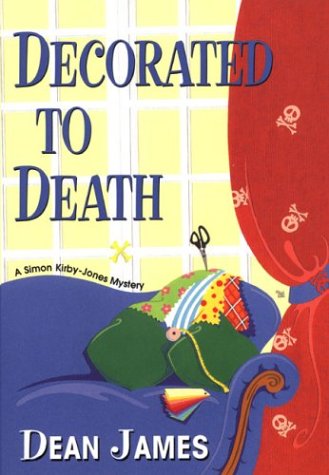 In James's third witty cozy (after 2003's ) to feature author, part-time sleuth and gay vampire Simon Kirby-Jones, the usually quiet English village of Snupperton Mumsley is astir over the arrival of Zeke Harwood, the obnoxious star of the popular TV decorating show . Zeke and his staff plan to film the redecorating of Lady Prunella Blitherington's drawing room, but he threatens to paint the room red when he and Lady Prunella get into a nasty argument, caught on tape. When Zeke is later found bludgeoned to death and smeared with red paint in the now dismantled drawing room, Lady Prunella becomes the chief suspect, but not, as Simon soon discovers, the only one. Joining forces with good-looking Det. Inspector Robin Chase, Simon uncovers motives galore among the guests, villagers and, yes, even the butler. Meanwhile, Simon is perplexed by his own personal mystery—his sudden urge to nibble the veins in people's necks, a vampire instinct that his medication is supposed to control. As in an elaborate and fun game of Clue, all the pieces come neatly together. A well-crafted mystery combines with whimsical characters (the interplay between Simon and Lady Prunella's son, Giles, is a highlight) to create an imaginative spoof on the classic locked-room mystery.