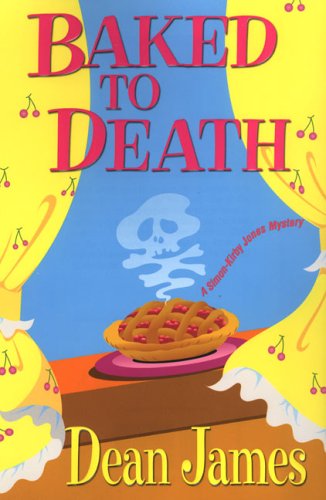 James's fourth cozy to feature the gay vampire, medieval historian and amateur sleuth, Simon Kirby-Jones (after 2004's ), takes a bitchy, laugh-out-loud look at historical re-enactments and the obsessive people who live them. In the Bedfordshire village of Snupperton-Mumsley, Lady Prunella Blitherington, the mother of Simon's dishy assistant, Giles, has sold a meadow to London businessman Murdo Millbank, who wants to build a year-round banquet hall and tourist attraction on the site. But first he has to co-opt the re-enactment group, Gesta Angliae Antiquae, that has settled in for a weeklong "medieval faire." Since King Harald Knutson (Henry Baker, greengrocer, in the real world) is dead set against Millbank's plan, Baker has to be ousted for a more compliant king, restaurant owner Luke d'Amboise (aka Luke de Montfort, Duke of Wessex). When Luke succumbs to a poisoned fig pastry (recipe included), Simon finds any number of suspects who wanted the man dead. The reappearance of Simon's graduate adviser and ex-lover, Tristan Lovelace, further complicates his life. Readers will be guessing the killer's identity right to the end of this frothy entertainment.