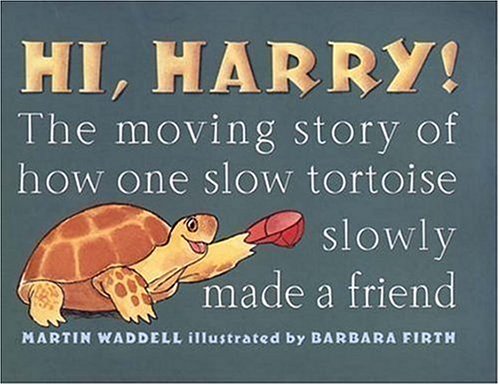 HI, HARRY!: The Moving Story of How One Slow Tortoise Slowly Made a Friend

The author/artist team behind and its companions advance their latest story at a snail's pace—and that's a virtue in this sweetly winning picture book. Harry the tortoise wants to play, but Buster Rabbit, Stan Badger and the others leave him in the dust, racing ahead before he can even finish the conversation. With a minimum of inkstrokes and simple watercolor wash, Firth's portraits of the expressive hero convey his hopefulness at each meeting and his disappointment at each parting. In the end, Harry finds someone his own speed: Sam Snail. Waddell and Firth relate this minimal story with outsize artistry. The text, spare at the outset, grows almost effusive once Harry and Sam get going. Its droll humor, however, stays understated even as Harry and Sam play (their games include "Slow Races" and "Heads In and Heads Out"). The design accommodates a range of visual jokes, beginning with the deliberately attenuated exchanges between the characters (Harry's two-sentence dialogue with the rabbit, for example, occupies four full spreads). Firth throws in just enough comic touches. Harry wears a baseball cap; various insects act as interested onlookers; Sam Snail announces his presence with a surprise, ta-da!-like gesture. The horizontal format, as if scaled to a tortoise's vantage point, will draw in and hold the audience. Ages 3-6.