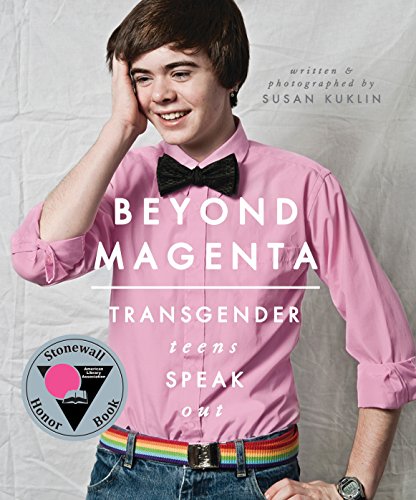 Beyond Magenta: Transgender Teens Speak Out

In a sorely needed resource for teens and, frankly, many adults, author/photographer Kuklin shares first-person narratives from six transgender teens, drawn from interviews she conducted and shaped with input from her subjects. The six “chapters” read like personal histories, with Kuklin interjecting occasional context and helping bridge jumps in time. Readers will gain a real understanding of gender as a spectrum and a societal construct, and of the challenges that even the most well-adjusted, well-supported transgender teens face, from mockery by peers and adults alike to feelings of isolation and discomfort in their own bodies.

When readers meet New York City teenager Christina, she has gotten into a knock-down fight on the subway with two girls who were making fun of her; although Kuklin’s color and b&w portraits appear throughout, 19-year-old Mariah requests no photographs of her be used, confessing, “I’m not ready for people to see me.” While Kuklin’s subjects are candid about the difficulties of coming out as transgender to family and friends and the patience that transitioning often requires, their honest, humorous, and painful remarks about their relationships with gender are often downright revelatory. “Because I’m perceived as male, I get male privileges. It weirds me out a little bit,” says Cameron, whose PGP (preferred gender pronoun) is the plural “they.” Nat, who also prefers “they,” is relieved when diagnosed as intersex. “It proved what I had been feeling all along. I was not only emotionally, psychologically, and spiritually both sexes; I was physically both sexes, too. This is who I am.”

A q&a section, author notes, glossary, and print and online resources close out the book. But its chief value isn’t just in the stories it reveals but in the way Kuklin captures these teenagers not as idealized exemplars of what it “means” to be transgender but as full, complex, and imperfect human beings. As Kuklin writes, “My subjects’ willingness to brave bullying and condemnation in order to reveal their individual selves makes it impossible to be nothing less than awestruck.” She isn’t wrong. Ages 14–up. Agent: Brianne Johnson, Writers House. (Feb.)