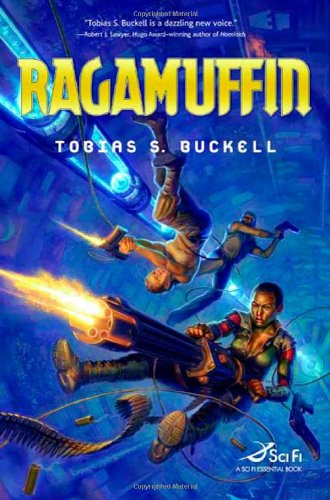 Set in the same far-future universe as Crystal Rain (2006), in which the ruling alien Satrapy has confined humanity to the fringes of a confederation of worlds linked by wormholes, Buckell’s second SF novel provides plenty of gun play and close calls for his heroes. The Satraps now seek the all-out destruction of the Raga, descendants of an Earth island culture. A young Raga woman, Nashara, attempts to evade capture from a determined pursuer, just as the wormhole to her home, Nanagada, mysteriously reopens. Meanwhile, the aliens who control Nanagada struggle for power, Teotl against Loa, while humans play them against each other, hoping to break their iron control. As the political situation destabilizes, Nashara and her friends appear, and total war for the right of humanity to live free becomes inevitable. Buckell plays with Caribbean and Aztec cultures, bending their exotic flavor to technology-flavored ends. Though the ending is never in doubt, the twisty ride getting there is a lot of fun. (June)