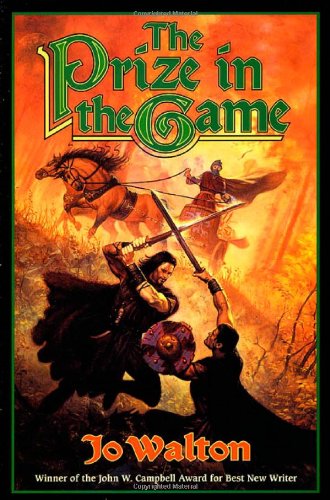 THE PRIZE IN THE GAME

Out of the Celtic twilight, that gold mine of romance lore for contemporary fantasists, comes Walton's retelling of the wooing of Emer, set in the same world as her first two novels, and . This story, an expansion of a passage in , follows a group of noble-born youngsters on the cusp of adult warriorhood, their relationships as intertwined as a Celtic knot, in a brawling, bloodthirsty culture where gods stoop to speak with men. Just as one form shifts to another in Celtic art, Walton constantly shifts the point of view as she traces the early careers of beautiful Elenn and Emer, her younger charioteer sister, princesses of Connat being fostered in Oriel for a year; sardonic Conal; the wild dream-ridden Darag; and gentle Ferdia of Lagin, who loves Darag to his own destruction. When a horrible accident causes the death of a warhorse and in revenge the Beastmother goddess Rhiannon curses Oriel, political alliances shatter and reform among these distrustful kingdoms. It seems that Celts, male and female alike, would rather fight than eat. Walton sure-handedly evokes a primitive realm where the Otherworld seamlessly impinges upon reality, bringing sounds, smells, sorrow, hatred and burning love to life as powerfully as the thrust of a barbed spear. She also captures the terrible beauty of a warrior race in an outworn time, struggling, in Yeats's phrase, to come clear of the eternal nets of wrong and right.