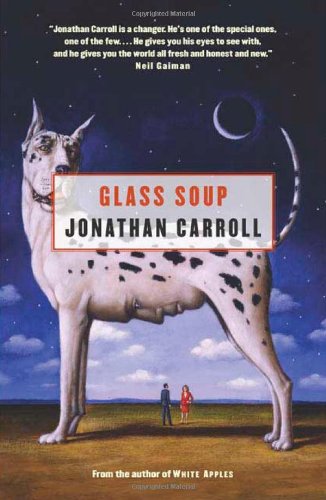 An ambitious retelling of the cosmic struggle between good and evil, with a little Judeo-Christian mythology and a smattering of popular culture mythos thrown in, make Carroll's latest a delicious dish—one that's lighter and better plotted than his (2002). A group of 30-something Americans living in Vienna (where Carroll himself resides), find themselves caught in the middle of a battle between God (a giant polar bear named Bob, or possibly a mosaic) and Chaos (most often John Flannery, a rapacious sex demon—when he's not just raw ectoplasm inhabiting a leather sofa). The McGuffin is Anjo, the unborn baby of Isabelle Neukor. In a reverse Orpheus, Isabelle has already crossed the border between life and death to retrieve the deceased Vincent Ettrich, Anjo's father. As the contest for Isabelle's child heats up, more and more characters—some good, some evil, but most indifferent—are drawn into the fray, while the world, both real and unreal, living and dead, constantly blends, shifts and changes dimension. In-jokes abound, as do barbs thrown at George W. Bush and Arnold Schwarzenegger, rap music, Austrian traffic problems and even chocolate pudding. This is a marvelous comic feast, but logic, consistency and plausibility are not on the menu. .