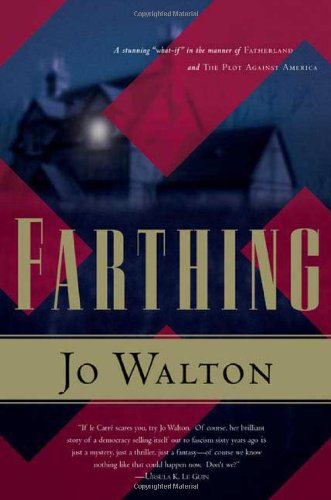 World Fantasy Award–winner Walton ( ) crosses genres without missing a beat with this stunningly powerful alternative history set in 1949, eight years after Britain agreed to peace with Nazi Germany, leaving Hitler in control of the European continent. A typical gathering at the country estate of Farthing of the power elite who brokered the deal is thrown into turmoil when the main negotiator, Sir James Thirkie, is murdered, with a yellow star pinned to his chest with a dagger. The author deftly alternates perspective between Lucy Kahn, the host's daughter, who has disgraced herself in her family's eyes by marrying a Jew, and Scotland Yard Inspector Peter Carmichael, who quickly suspects that the killer was not a Bolshevik terrorist. But while the whodunit plot is compelling, it's the convincing portrait of a country's incremental slide into fascism that makes this novel a standout. Mainstream readers should be enthralled as well.