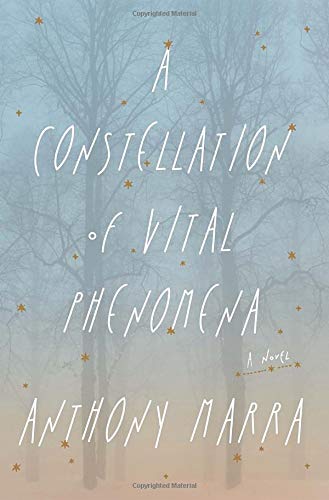 A Constellation of Vital Phenomena

Marra’s sobering, complex debut intertwines the stories of a handful of characters at the end of the second war in bleak, apocalyptic Chechnya. Though the novel spans 11 years, the story traces five days in 2004 following the arrest of Dokka, a villager from the small Muslim village of Eldar. His eight-year-old daughter escapes, and is rescued by Dokka’s friend Akhmed, the village doctor, who entrusts her to the care of Sonja, the lone remaining doctor at a nearby hospital. Why Akhmed feels responsible for Haava and chooses Sonja, an ethnic Russian keeping a vigil for her missing sister, as her guardian is one of many secrets; years of Soviet rule and the chaos of war have left these people unaccustomed to honesty. Marra, a Stegner Fellow, writes dense prose full of elegant detail about the physical and emotional destruction of occupation and war. Marra’s deliberate withholding of narrative detail makes the characters opaque, until all is revealed, in a surprisingly hopeful way, but there’s pleasure in reconstructing the meaning in reverse. As Akhmed says to Sonja, “The whole book is working toward the last page.” Agent: Janet Silver, Zachary Shuster Harmsworth. (May)
close
Details