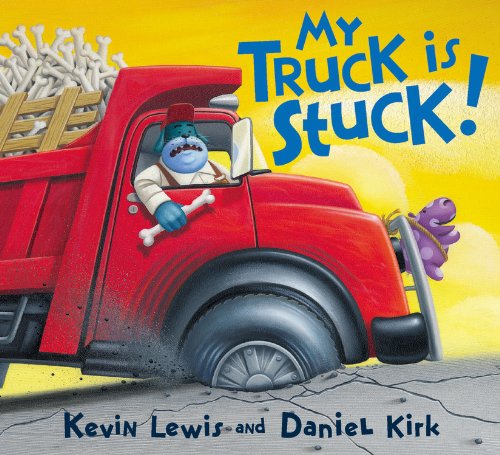 MY TRUCK IS STUCK!

How many engines does it take to get a pothole-ambushed dump truck unstuck? Readers travel through a stretch of desert road with canines at the wheel before arriving at a shaggy dog of an answer. The pooch driver flags down four vehicles in succession (all driven by various breeds) in hopes of getting a hand (or paw) to "make my stuck truck go." But even with the five vehicles tied together and gunning in unison, the result is a bust: "Lug and lurch. Tug and tow./ 5 engines roar./ The truck won't go." Kirk's illustrations create a subplot: the same culprits (gophers) who dig the hole in which the truck gets stuck also make off with its load (a truckbed full of bones), bit by bit, spread by spread. When Mr. Mechanic shows up with his tow truck, everyone soon heads on their way—though the newly freed truck carries a dramatically lighter load. The formulaic narrative and stark landscape may not have as much of the magical pull as the team's first joint effort, , but this year's model still offers plenty. Lewis gets impressive aural mileage from his simple rhymes, while Kirk soups up his streamlined oil paintings with comic nuance. The dog characterizations are a stitch, and youngsters will enjoy the subtle jokes (a moving van's motto is "Ruff & Reddy," with a red bulldog mascot) along the way. A load of fun. Ages 2-5.