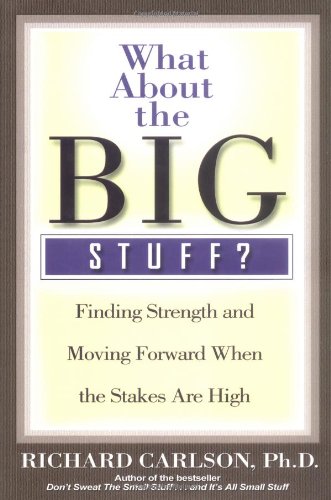 WHAT ABOUT THE BIG STUFF? Finding Strength and Moving Forward When the Stakes Are High

In Carlson's bestselling Don't Sweat books, he declares that the right perspective can help everyday troubles seem less worrisome. Here he attempts to answer a question he received from thousands of readers. Tackling the "big stuff"—e.g., death, divorce, illness, September 11—Carlson offers a kind of advanced-level self-help book that's as heartfelt and useful as his "small stuff" guides. "Fortunately, a vast majority... is small stuff.... However, there's no denying that 'big stuff' exists," he admits. The key to handling it, he says, is to prepare by learning how to practice inner peace. If one is ready, according to Carlson, one can better handle pain. Drawing on Eastern and Western religions, he advises readers on mourning a loved one's death ("Healing from a loss is a natural process of life—just as healing from a broken bone is") and coping with why that person had to die so soon ("The first step toward inner peace... is admitting the fact that we simply don't know certain answers"). He also shares Mother Teresa's thoughts on doing "small things with great love"—since cultivating compassion can help one prepare for big stuff—as well as Buddhist philosophies on the power of forgiveness. Many of the messages readers have heard repeatedly in churches, synagogues, memorial services and even on . But dealing with the repercussions of September 11 and massive job layoffs, people want and need to hear them again. Carlson's many real-life examples of folks going through hard times and hard decisions are right on.