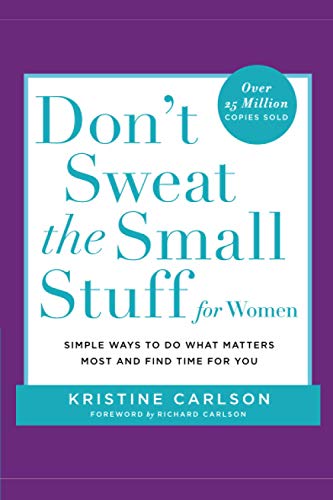 DON'T SWEAT THE SMALL STUFF FOR WOMEN: Simple and Practical Ways to Do What Matters Most and Find Time for You

An easy-to-read collection of short essays meant to uplift and inspire soccer moms everywhere, this addition to the Don't Sweat the Small Stuff series offers nothing more nor less than its predecessors. Carlson (whose husband, Richard, wrote the original book) joined him in writing . This time, she relates many first-person stories from her own life and those of her friends in a just-between-us-girls tone that's based in part on gender stereotypes (e.g., "our gift of female intuition"; "our sensitive natures"). Her chatty pep talks cover such topics as comparing oneself to media images, overextending oneself, preventing and coping with stress and learning to say "no." Carlson advises women to appreciate their children's "fleeting" childhoods, to speak and listen from a place of love, to swallow angry words and gossip, to take time for themselves, to nurture friendships with other women and to keep tabs on their financial position and marketability in case they lose their spouse through death or divorce. Unfortunately, she misses a few good opportunities to offer important information, as in her breezy entries on PMS and mammograms. Aimed at people whose problems are mostly "small stuff," this small tome offers little to offend and much to calm and comfort.