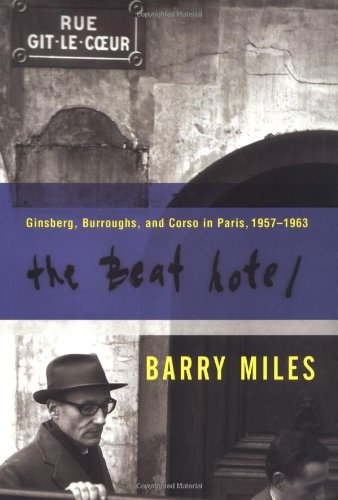 Miles (Jack Kerouac: King of the Beats, etc.), who has been intimately involved in the documentation of the Beat scene, focuses here on an international aspect of Beat work: Allen Ginsberg, William Burroughs and Gregory Corso's escape from ""the conformism and Puritanism of fifties America"" during the six years (1957-1963) they lived at a cheap hotel on Paris's Left Bank. During this period, the three pursued such now-famous creative endeavors as ""Kaddish,"" Naked Lunch and ""Bomb."" Their important work during this time, particularly the ""cut-up"" method pioneered by Burroughs, had an important formative influence on the next generation of artists, according to Miles. Part scholarly study and part gossip-fest, this account traces the aesthetic, sexual and social goings-on in Paris: ""Within the shelter of the Beat Hotel,"" Miles writes, ""they had mapped out many of the paths that the `sixties generation' was to actually follow: the recreational use of drugs and experiments with psychedelics..., investigations into magic and mysticism..., gay rights and sexual freedom , the legalization of `pornography' and challenges to obscenity laws."" The hotel on rue Git-le-Coeur, closed for nearly four decades now, still symbolizes the fruitful ground of collaborative creation among the Beats. The significance of this period in Paris for the Beats may be slightly exaggerated by Miles to justify this book-length study, but those interested in the lives of these cult figures will most likely forgive such overdetermination in the interests of learning in an entertaining narrative about important writers now considered American literary heroes. (July)
close
Details