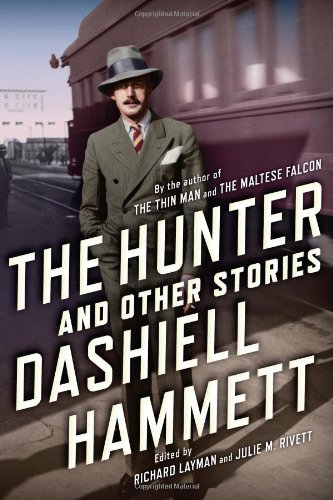 The Hunter and Other Stories

Reviewed by Don Herron. I know fans of crime writer Dashiell Hammett (1894–1961) who have been waiting decades to read the stories collected in this book. Stories from his personal files that he probably never tried to sell, a couple more that haven’t been reprinted in over 80 years—plus never-before-published screen treatments and a fragment starring his iconic PI, Sam Spade. Most come from an archive placed by his longtime companion, Lillian Hellman, in the Ransom Center, University of Texas, and it’s taken all these years to get the rights cleared, a saga in itself. Nothing here gets close to Hammett’s white-hot run of fiction in the pulp Black Mask from 1923–1930, the long series of tales featuring the short, fat Continental Op, building up to the peak novels The Big Knock-Over and Red Harvest, and the creation of Sam Spade for The Maltese Falcon. That’s where he made his rep, allowing him to cash out in Hollywood in the 1930s. By 1934 and publication of The Thin Man and a handful of stories, Hammett was done with prose fiction—whatever he tried to write after that was left as fragments for the Ransom archive. But if you’re a Hammett fan, you’ll want to savor any leftovers from the feast. Under the section head “Crime,” the title story is one of a small group of unpublished detective tales about a short, fat investigator bullying a confession out of a suspect, but lacking some touch that might have made it solid. Other sections use the headings “Men” and “Men and Women.” Most intriguing is the never-before-published “Magic,” a tale of sorcery perhaps intended for the pulp Weird Tales—it’s as if Hammett is channeling WT mainstay Clark Ashton Smith. Pulp scholars will be talking about that one for years. “On the Way” appeared in Harper’s Bazaar in 1932, an autobiographical romp—featuring the author and a woman based on Hellman cruising the bars and dance clubs in Hollywood—which sees print in a Hammett collection for the first time. “Screen Stories” collects three Hammett treatments, including “The Kiss Off,” the basis for the Gary Cooper film City Streets, and “On the Make,” originally a vehicle in which Sam Spade went crooked, but this version features a shady PI named Gene Richmond, though it does resurrect the gangster the Dis-and-Dat Kid from The Big Knock-Over. Always good to see old pals one more time. The collection wraps up with a lost Sam Spade story, “A Knife Will Cut for Anybody,” the only fragment included in the book. Not from the Texas holdings, this item comes from an unnamed mystery writer who bought it on the antiquarian market years ago—as rare as rare can be. I understand that the e-book edition will include other fragments as extras, so die-hard collectors will want that, too. This may not be the last Hammett book: current collections do not gather all his work—no less than two Op tales are missing—but we’re getting close to the end. And then, someday, we fans will want definitive editions—and few authors deserve them more. Agent: Joy Harris, Joy Harris Literary Agency. (Nov.) Don Herron is the author of The Dashiell Hammett Tour, based on his long-lived guided walk, and Willeford, a biography of cult crime writer Charles Willeford.
close
Details