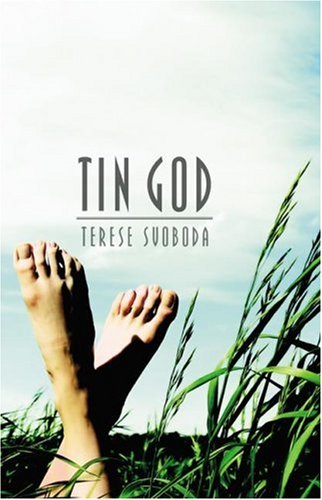 Fabulous fabulist Svoboda ( ) checks in to indulge a talent for wild, sketchy comedy. Laid in Willa Cather country, this quick take has some of Thomas Pynchon's quirky Americana crossed with the Indian tales of Jaime de Angulo. A conquistador rides through the Midwest of 500 years ago; his blue eyes make the Indians think he's God—and God in fact narrates the book. Flash to contemporary slackers Pork and Jim as they lose a bag of drugs in the same field, while God watches wryly, speaking with the crusty accents of a cracker-barrel philosopher. God feels at home in the Midwest, where everyone is waiting for His (or Her) signs. Bessie, the clairvoyant cleaner (she sees God in a tin hat) and the mother of Pork, is the daughter of a migrant worker; with Rolf, her bar-owner ally, she tries excavating the treasure she's glimpsed in her dreams, until alien light storms and the whispers in the grass scare them off—and, it is implied, destroy their budding romance. Back and forth the narrative moves, with Steinian logic gluing together this eccentric vision of a God-driven Middle America. Svoboda loves her red-state mopes, and that warmth both illuminates and animates her eccentric prose.