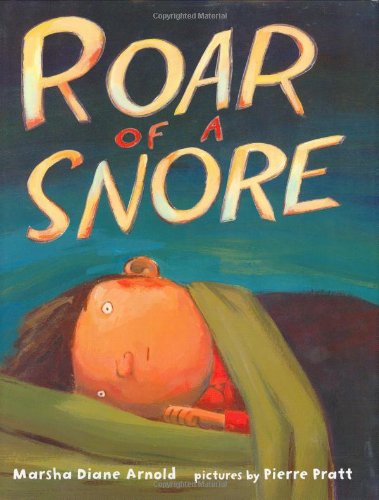 Roar of a Snore

Though it may sound like the still of the night at the Huffle's house,("The sky was dark, the stars were bright," the book begins), someone is snoring—big-time. "A mighty snore!/ A clamorous snore!/ A thundering, ear-splitting,/ Roar of a snore!" declares Arnold ( ) in quasi-Homeric mode. Moving through the darkened house—which Pratt ( ) niftily evokes with a noir-ish palette and lighting—a posse led by young Jack eliminates the usual suspects one by one. Pratt's elongated, hyper-angular characters possess a kind of goofy, robotic quality that heightens the absurdity of their quest; he also gets some comic mileage out of the instantly recognizable ways family members hit the sack (a toddler splayed in her crib, Dad snoozing slack-jawed in a comfy chair). Following the s floating through the night air, the family finally traces the sound to the barn, where a tiny stray kitten sleeps in a sea of hay, "snoring all his cares away." Readers, like the Huffles, will be won over by the kitty, with whom the entire family decides to bed down in the barn: "One giant Snore sailed through the night." The book serves as essentially one extended joke, but a good one (especially for kids living with a snorer), and provides confirmation—once again—that Pratt is a singular talent. Ages 4-up.