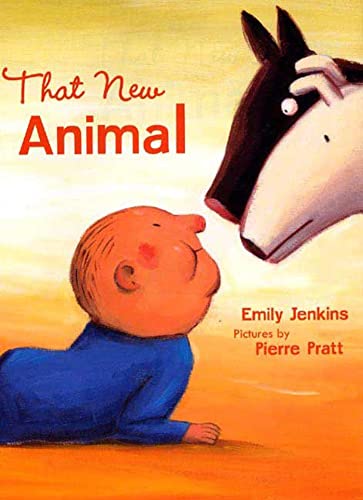 Sibling rivalry finds its canine counterpart in the roiling emotions of the two furry anti-heroes in this laugh-out-loud domestic comedy. Seemingly abandoned by their human owners when a new gnomish-looking baby arrives ("They sit there, and don't seem to notice that Marshmallow is showing his tummy, all ready to be scratched"), the dogs find themselves cast into unfamiliar roles of id and superego. One, for instance, feverishly plots the baby's demise ("FudgeFudge wants to sleep in that new animal's cradle. "). But when a new interloper arrives, the pooches take another tack; now baby must be protected at all costs: "It's not new animal to go picking up whenever he feels like it," Marshmallow proclaims, barking until Grandpa moves away from the cradle. "It is our animal to hate as much as we want to." From that comically off-kilter epiphany, it's a short jump to acceptance, and sloppily bestowed licks on baby's cheeks. Jenkins's ( ) gift for melding irony with empathy results in the kind of resonant and quotable text that youngsters will demand to hear again and again. Pratt's ( ) wry paintings are in perfect sync. When the dogs spot the family blissfully napping together, the look of confusion and sadness emanating from the pets' tiny eyes will strike a chord with any child who's ever wondered how soon that new baby can go back to the hospital. Ages 4-8.