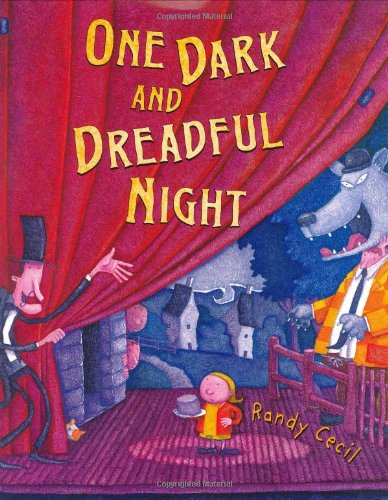 ONE DARK AND DREADFUL NIGHT

Funny-bone-tickling text and merry illustrations merge in this crackerjack picture book, featuring hilarious send-ups of classic fairy tales and a cast of slightly subversive kids. Maestro Von Haughty—dastardly in a top hat and sinuous mustache—narrates "three tales of terror and misfortune" at the Wayward Orphans Theatre. But halfway through an adaptation of Little Red Riding Hood, the lead actress decides she prefers princesses, butterflies and kittens to the towering, nasty wolf ("Hold it! I don't think I like the way this story is going"). Cecil ( ) signals the ensuing mayhem with his lively, joke-packed illustrations: the wolf's head comes off to reveal a button-eyed actor; two orphans form the fore and aft of a cow costume when the upstart actors decide to do Cinderella "out west" instead. (Other tales include twists on Jack and the Beanstalk, and Hansel and Gretel.) Building on the sight gags, Cecil playfully undermines Maestro Von Haughty's faux-frightening narration ("the dark grew darker, and the trees grew more twisted, and all the sharp pointy things grew sharper and pointier") with the orphans' irreverent asides ("I think somebody has gone a little overboard with the briars and brambles"). The result? Read-aloud fun for junior thespians and a clever reminder that what seems scary can always be undercut with a heavy dose of humor. Ages 5-9.